My experiences with a brake happy novice bus driver this past weekend have prompted me to write a few articles on the do’s and don’ts of driving an entertainer coach. This article will be the first of a series I will be writing in the next couple of weeks.

Working for Rhett Akins over the past few years I’ve become a bit spoiled regarding how we travel around the country. We regularly lease top-of-the-line tour busses from Roberts Brothers Coach, one of the best bus companies on the planet, and as most of our activity are weekends runs, it’s usually a different bus each time. Usually this kind of one-off leasing means  a different driver each time too, but we’ve been fortunate to wind up with an arrangement that allows us to have the same driver, Steve Pope, for most of these trips. This has turned out to be a best case scenario as he is an exceptional driver, and a great guy too. The downside is that he is so good that most others pale in comparison. 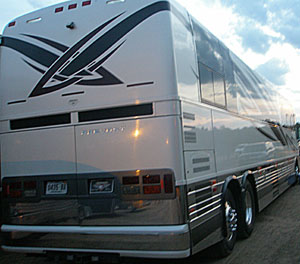 Well on this past weekends’ run, unfortunately as it turned out, Steve had to take the weekend off and we were stuck with a substitute driver. As bad luck would have it, the bus was sub leased through another company as well. So last Friday we set out from Nashville at 11 AM with our ‘mystery driver’ for the weekend. You never know how good or bad a driver will be until you’re down the road a ways, but on this trip it didn’t take long to figure out that this guy wasn’t very good.

We all noticed that he was a bit ‘brake happy’ before we even get out of the city, and by the time we were going 70 mph down I 65 we could feel some excessive side to side sway as well. A short while after our departure, the sounds of country music could be heard loudly in the front lounge, emitting from the driver’s seat stereo. At one point during the drive I asked him if he had been driving buses for very long, and he said “I just recently started driving buses, but before that I drove semi’s for a long time.” I felt like saying ‘I’m not surprised.’ but decided to refrain. I couldn’t help but notice several CD jackets and CDs strewn about the floor by his feet. Perhaps it might have served him well to spend a bit more time focusing on the road rather than his CD collection. By the time we arrived in Troy, Alabama six hours later, I was fairly worn out from the excessive G-force this novice driver delivered.

We arrived at Troy University and the driver pulled the bus over to figure out where our final destination would be, which seemed odd considering I had already given him an itinerary with the venue’s street address and he was using a GPS. When I asked him what street we were on he exclaimed “I don’t know.” It seemed like there just was not a lot going on upstairs with this fellow. So I got my contact at the fraternity on the phone and he guided us in. After the bus had landed, I asked him to level the bus with the air shocks as we were parked on an incline. After a few failed attempts he gave up, either because the leveling function on this bus didn’t work, or the leveling function in his brain didn’t work.

We sent the driver off to a hotel room to sleep and went about our day loading in, sound checking, hotel time, etc. We played our show, loaded out, and waited for our driver to return to embark on leg two of this bounce-athon. Shortly after he returned, we departed for the 430 mile, eight hour ride to Kentucky. After several minutes of ‘testing’ the brakes on the way out of the

parking lot, we were rolling down the highway and I went to bed. After about a half hour or so of being tossed around in my bunk I felt the bus come to a quick, hard stop, almost as if he had slammed on the brakes. This was the last straw, I couldn’t take it anymore. I walked to the front of the bus and confronted our driver.

“What’s going on up here?” I asked. “Sorry, the light came up kind of quick.” He apologized. With this, I could no longer refrain and unleashed on him “You need to look ahead more and allow yourself more time. I wasn’t going to say anything, but this whole trip has been pretty rough so far. You’re really hard on the brakes. If you can’t deliver a smoother ride, none of us are going to get any sleep, and we badly need our sleep tonight.”

I returned to my bunk, and I must say that the quality of the ride did improve, at least for the next six or seven hours. I was awake in my bunk when he took an exit and pulled into a mini mart a little while later, the braking considerably smoother. The side to side sway had improved as well. Unfortunately his new habits were short-lived and I was awoken around 10 AM to what seemed like an endless tour of a Hampton Inn parking lot. After what must have been some sort of 15 point turn followed by some more brake ‘testing’ we had finally landed. He then notified me that he needed to add some water to the bus’s septic as it had run out. It was also at this point he admitted that he didn’t actually know how to do this. A couple of other things that he apparently didn’t know he was supposed to do were the emptying of the trash, and a quick once over cleaning of the front lounge after each drive. We played our show and did safely arrive back to Nashville later that night, but not without a rough ride and some unnecessary stress.

Driving a tour bus goes way beyond simply keeping the bus on the road. A good bus driver thinks of his job as not just driving a bus full of people, but driving a bus full of people who are sleeping. This means a smooth ride must be delivered throughout the duration of the trip, especially the last part of the trip. People stay up late on these tours, so when the bus is finally landing in the morning, it is crucial not to wake the passengers as the mornings are often when they get most of their sleep. Avoiding unnecessary distractions (like cranking a stereo, or fumbling through CDs) is another big no-no. Most tour buses are 45 feet long and weigh over 30,000 pounds, they are not particularly maneuverable, nor can they stop on a dime. How can you hear the horn of another vehicle if you’ve got your stereo cranked? How would you be able to avert an accident if you are staring down at your CD collection? A good bus driver should know his equipment too – how to add water, bus leveling, GPS programming, etc.

So what did this guy do wrong? Perhaps a question with a shorter answer might be, what did this guy do right? Well, he didn’t kill us, I guess that’s one thing he did right. You know how at Christmas time somebody always gets a big box of mixed chocolates? And you grab one, excited at the prospect that you might get the one with an almond inside, but fearful that you might get the one with the cherry? Well that’s what it’s like with bus drivers, some are wonderful, and some will make it so you don’t like chocolate anymore. After last weekend, I’m sick of chocolate. 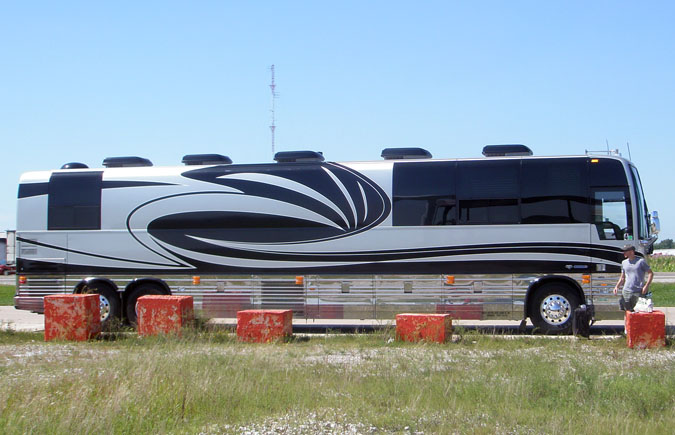