It was a warm Wednesday night in July of 2007 when the Rhett Akins tour left Nashville, Tennessee, bound for Macon, Georgia, on what would be a four city run across the deep South. The bus, a still shiny and new looking 2005 Prevost XLII, wreaked of personality, while the driver, Les, was somewhat reserved and looked a bit less than shiny and new. As is typical in the world of one-off bus leasing, this would be our first and only trip with this driver, and although he seemed to drive okay, we knew almost nothing about him. Well, over the next four days we would 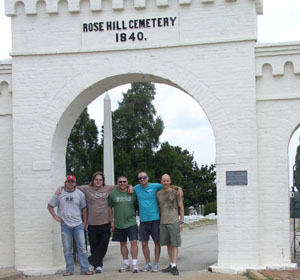 learn everything we needed to know about ‘Mr. personality’.

The six-hour ride to Macon was uneventful enough, and I didn’t even wake up when we pulled into the Ramada Inn parking lot. The rest of the day went pretty smoothly, and we even managed to fit in a visit to the infamous ‘Rose Hill Cemetary’, the Allman Brothers early stomping ground and eventual resting place of Duane Allman and Berry Oakley. Our show at the Cox Capitol Theatre later that night went well, after which we taxied the bus back to the hotel to sleep over as our next destination, Thomaston, Georgia, was only 50 miles away.

We left Macon at 11:00 AM on Friday morning for the one-hour trip to the small town of Thomaston, Georgia, eventually landing in front of ‘Q’s Downtown Grill and Music Hall’, and had a little down time between our arrival and load-in. Most of us were hanging in the front lounge when Les began his first in a series of rude and inconsiderate commentaries. “I was just offered an $85,000 a year driving job, but I think I’m going to turn it down” he boasted. “Why? That sounds like a great gig” one of us asked. “I usually make a lot more than that. Last year, I made $120,000” he continued in an annoying offhand manner. “What an asshole!” we all thought. We all knew that bus drivers make a ton of money but didn’t need to be reminded just how much more they make then the rest of us.

A short while later we sent Les off to his hotel room for sleep and went about our day. Rightafter load-in the wind picked up outside and it began to pour. Some severe weather had moved in and the power was knocked out for a while. We later learned that a tornado had touchdown a couple of miles away, but fortunately the weather passed, the power came back on, and we continued about our day. We played our show that night to a packed house, loaded out, and enjoyed some late night partying on the bus while we waited for our driver. As luck would have it, the runner was late picking up Les, who apparently had to wait in the hotel lobby for about 45 minutes. So by the time Les arrived back to the bus, he was somewhat agitated and had a hard time concealing this. 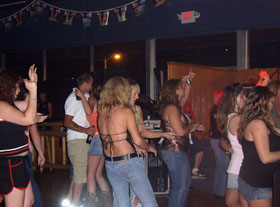 Sometime around 3 AM we began the 7 Hour drive to Augusta, Georgia, although now, the quality of the drive was noticeably rougher. Other than some hard braking at a few points, we assumed that the rough ride was just due to some poor road conditions across that part of the state. By the time we pulled into ‘The Country Club’, the happening nightspot in which we would be performing on this Friday night, a red carpet had been laid out for our arrival. Band and crew quickly attacked a huge platter of chicken fingers, shrimp cocktail, and a veggie plate that had been set out for us in the green room.

We sent Les off to his room, loaded in, and sound checked. This was of course followed by dinner, hotel time, and a blistering performance to a packed house of 1000 plus concertgoers and parties. The crowd was overly enthusiastic on this hot summer night and the party spilled out into the parking lot after the show. By the time Les returned around 2 AM the front lounge of the bus was full of nightclub patrons and in full ‘K-tel dance party’ mode. There was also 30 or 40 people hanging out in the parking lot near the bus, and this is where Les delivered his next uncanny remark. “Does Rhett party like this every night?” he said judgingly. “Every night’s different, sometimes we party a little bit, other times we’re tired and go to bed. Why do you care?” I answered, now  annoyed with this would-be high school prom chaperone. “It just seems pretty irresponsible to me. Not a good way to run a business.” he grumbled.

About an hour later we set sail for Myrtle Beach, South Carolina, the final stop of this five legged bus ride that was getting rougher every minute. Apparently annoyed by our after show activities, 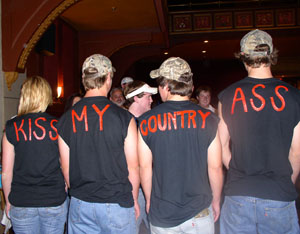 Les tossed us around pretty good for the five hour trip, perhaps as some sort of punishment for having “too much fun”. A lot of side to side sway, hard braking, you know, the kind of bus driver tendencies typical of a moron. We pulled into the parking lot of ‘The Boathouse’ which was the venue we would be playing,  and this time I was instantly awoken as the bus jerked to a quick, hard stop. A little while later I sent Les off to his room at the adjacent Holiday Inn, notifying him that we planned to depart for home at 11 PM that night.

Saturday proved to be another great outing for Rhett and band, an outdoor summertime concert behind a nightclub on the banks of a river. Again, the day’s activities and concert went quite well, with the biggest drama being delivered by our wing-nut bus driver at the end of the night. Our show had ended at 9:30 and we were all hanging out inside the bar waiting for the 11:00 PM bus call. Around 10 of, I walked out to the bus to see if Les was ready. Upon opening the bus door I was astonished to see him sitting in the driver’s seat smoking a cigarette (In case you’ve never ridden on a tour bus, in general, this is a no-no). Smoking on our busses is only permitted while the bus is in motion, as this will allow the smoke to ventilate out an open window. I asked him to not smoke on the bus while not moving, and he reluctantly extinguished his cigarette.

I told him I would go get the rest of the guys and that we could leave shortly. Upon returning to the bar I quickly realized a couple of the guys must’ve gone over to the hotel, and called them to tell them we were ready to leave. When I returned to the parking lot I was dumbfounded to see the tail lights of our bus growing smaller in the distance as Les was apparently more than ready to be done with us. When I called him on my cell phone and asked “What are you doing?” he sarcastically answered “Are you ready to go yet?”. “Well yeah, I was just rounding up the guys. I told everyone were about to leave, and next thing I know I’ve got guys running after the bus across the parking lot carrying 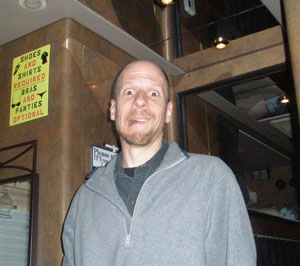 suitcases. What the hell are you doing?” “All right, I’m coming back now.” He said in a cocky tone of voice, almost as if this was some sort of weird game of bus driver/tour manager chicken.

He brought the bus back, we hopped on, and took off down the highway, more than ready to be done with this jack-off. About an hour Into the drive, our drummer, Cliff, informed me that he had left his suitcase back at the hotel. I was horrified. I was already at a breaking point with this driver, and it seemed like he hated driving us. This is the last thing I wanted to do, but I had to do it. “Hey Les, I hate to tell you this, but Cliff left his luggage back at the hotel and we need to go back and get it.” After muttering some sort of offhand comment under his breath, he literally locked up the brakes, sending people flying as bottles fell off the counter and smashed on the floor. Again, I was dumbfounded. “What the hell you doing? He didn’t forget his bag on purpose. We want to be done with this trip just as badly as you do. Do you really think we want to spend an extra two hours on this bus with you?” I unleashed.

“Sorry about that. I didn’t mean to hit the brakes that hard.” he said. I then added “So far on this trip, each night your driving has gotten rougher and rougher. We don’t care about making good time on these trips, we want a smooth ride so we can sleep. Do you think you can lose the attitude just long enough for that to happen?”

With that, he turned around, went back for Cliff’s bag, and then began the 600 mile trip home two hours later, and for the second time. I guess the only satisfaction we got out of this was the knowledge that we made the final leg of the trip two hours longer than necessary for “les the mess’.

I’ve been on a lot of buses, with a lot of different drivers, but this particular trip was a first. Never, and I mean never, have I had a driver just drive a waiting tour bus off into the night without telling somebody. Never have I seen one smoke a cigarette in the driver’s seat while the bus was parked. Never have I had a driver question our organization, or our right to party after the show. But then again, never had I ever experienced the exceptional bus driving skills of ‘Les the wing-nut’. 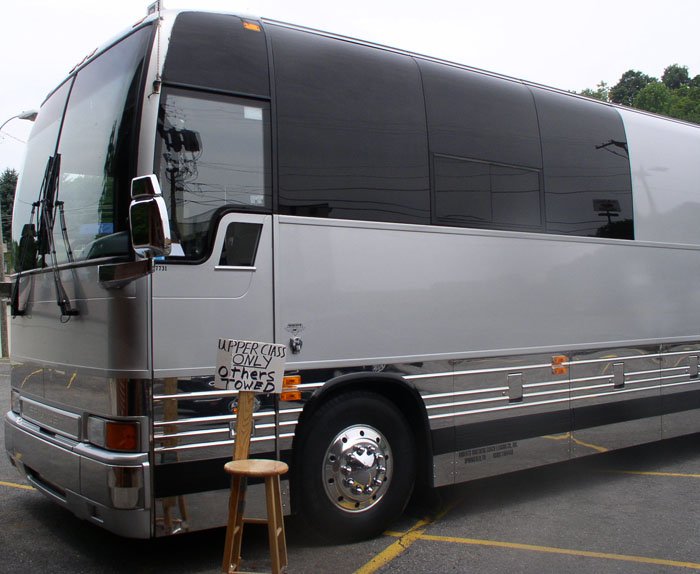