Saturday morning began for me at 5:30 AM, when I was suddenly awoken by the sound of a loud crack of thunder. By the time I dragged myself out of bed a short while later, a heavy downpour was underway, and our fair state of Tennessee was beginning to receive a walloping storm. On any other day this would have been less significant for me, but on this first day of May, 2010, Rhett Akins and band were leaving for an outdoor show in Alabama, and it was my job as tour manager to see it through.

All morning long, in between preparing for the trip, my wife Kelly and I kept checking the weather, and grew more concerned with every passing minute as the forecast was not good. During the 40 minute drive to the bus, which was exceptionally precarious due to the now torrential rain, I received a call from Rhett, who informed me he would be leaving late and driving himself to the show. We arrived at the bus, loaded up, and began the 130 mile drive to our destination, the small town of Hartselle, Alabama, just a little ways over the Tennessee/Alabama border.

The rain was relentless for the first half of the drive, and just when it seemed like our show was doomed, it gradually began to subside as we neared the Alabama border. I now received my second phone call from Rhett, and our newly found optimism was again put on hold when he told me that he just saw a car completely submerged underwater on the northbound side of Interstate 65. We all began to worry about our fearless leader (as well as our own fate) as we watched the news now showing video footage of the devastation this storm had just wreaked upon Arkansas, in the form of tornadoes, and Memphis, by way of flooding.

We safely arrived to our destination, a large open field in the middle of nowhere upon which a local business, Frederick Tractor Supply, was throwing a groundbreaking ceremony. As we 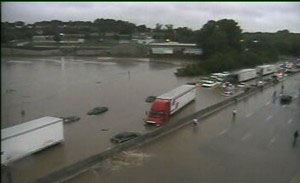 pulled down the long gravel driveway, I first spotted the stage; two flatbed trailers complete with a green tarp “awning”, supported by two by fours. I now received my third call from Rhett who informed me that the radio stations were no longer playing music, but delivering storm news, and that I65, I24, and I40 around Nashville were now closed due to flooding. A short while later I was greeted by the owner who told me “I think we may have dodged a bullet on this one.” as I felt a few light rain drops on my face.

The light sprinkle was short-lived, and we hesitantly began our load in and soundcheck. Halfway through soundcheck the sprinkle returned and intensified, so we covered our gear and returned to the bus. Around 5:30 it subsided, and we finished soundcheck and waited for dinner, some home-cooked barbecue that was allegedly “the best in the county”. As we sat on the bus, the latest news reports were now showing a broader picture of the pending apocalypse that loomed just outside our door step. Flipping between the Weather Channel and CNN, we were horrified to see images of Nashville interstates that looked more like lakes filled with half submerged cars and tractor-trailers, viewed through a gloomy mist of grey.

It seemed surreal that we were getting ready to play a concert, while just 100 miles to our north there were more than 70 cars underwater 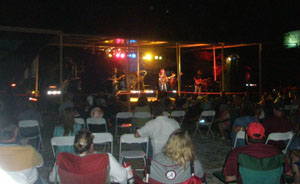 on the roadways we had just traveled upon. Strangely enough, it never did rain again on our quaint little country setting, and we played a 90 minute show to an approving audience of 500 or so tractors and concertgoers.

After the show was over, our bus driver Steve informed us that I65 was now passable, but that another round of storms was on its way, so we made a hasty departure to try to beat the next storm. Fortunately, the ride home was uneventful, and we arrived safely back to our cars in a parking lot near the Opryland Hotel. A short while later, as Kelly and I neared our home just West of Nashville, we came upon a city truck blocking the road in front of some standing water, and had to take a detour to a secondary entrance to our development. As we pulled into the driveway of our home, we were greeted by a cold dark house as the storm had knocked out the power in our area.

It’s now noon the next day, again raining heavily, and I’m writing this by hand as we’re still without power. We learned the day before that a flood watch will be in effect for middle Tennessee until Thursday, as this storm was not yet finished. Yesterday it rained 11 inches and less than 10 hours, and before the storm is done, we could receive up to 4 to 8 inches more. So far at least eight people have died from drowning in what is being deemed the worst flooding the state has seen in over 30 years.

It’s not over yet, and I wonder what we’ll learn when the power comes back on. As I sit with a pen and paper, looking through a window at a rain soaked canopy of green and grey, I’m still amazed at how a mere 14 hour bus gig, the shortest in recent years, was one of the most stressful and terrifying we had ever experienced. While some weren’t so lucky, at least for our group, it looks like we might have dodged a bullet on this one.