It’s springtime, and festival season is upon us. The time of year for county fairs and outdoor music festivals is here, and along with it comes the unpredictable variable of the weather. Working as a tour manager and touring musician, I can’t tell you how many times I’ve been in situations where a concert promoter or event coordinator seems to think they have magic powers when it comes to predicting the weather. They all seem to have a crystal ball that literally guarantees them a clear day despite any meteorologists forecast.

First of all, anybody that plans an outdoor show is taking a big risk, as these events are booked months in advance with no way of knowing what the weather will be on the day of show. Outdoor concerts and events on the highest level, usually have stages with a roof, and optional sides that can be put up in the event of rain. This will keep the performers and equipment protected, although typically leaving the audience exposed to the elements. Concerts and events on a smaller scale have varying degrees of preparedness, and many have stages with less than adequate covering. Also inherent to many of these smaller “townie” style events are event coordinators that can be a little less than rational when it comes to contingency plans for bad weather.

A few years ago I worked an outdoor show in Alabama in the month of June. The forecast all week long called for heavy rain and severe weather for the day of our concert. On show day, we arrived around noon, and it was already lightly sprinkling. A local high school football field was the site for this concert, and a large stage, with a roof but no sides had been constructed at one end of the field. Earlier in the week, I had suggested to the event coordinator that if the weather was looking bad, to have the concert in the high school gymnasium. As the weather predictions seemed to be spot on, I again made the suggestion, as there was still enough time to move the event inside. Of course, I was overruled, as the event coordinator said that the gym couldn’t hold all of the people they were expecting, along with the line “Most of the bad weather is supposed to blow just south of here.”

Not. By the time we were ready for sound check a couple of hours later, the rain started coming down heavy, and a strong wind was blowing the rain across stage. We quickly covered our 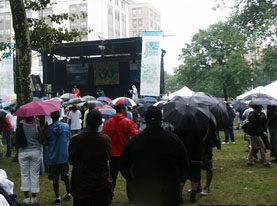 gear, while the sound company frantically covered their equipment with large tarps. A couple hours later, the rain subsided long enough for us to do a brief sound check, which turned out to be our only performance on this day. No sooner did we finish the sound check, when the sky opened up with a vengeance, soaking us to the bone as we ran for the bus. By 8:00PM, our official show time, the steady rain was now accompanied by lightning, and the soaked concertgoer’s standing on the wet field were told to retreat to their cars for safety. We were all on standby for the next couple of hours hoping that the weather would pass, but the radar showed otherwise. Even with the certainty of this night upon us, I’ll never forget standing outside of the bus in the pouring rain and arguing with the promoter, who was now practically begging us to perform on the wet stage, an electrocution waiting to happen. With rain dripping off the front of his hat and in between an almost constant barrage of loud thunder, I believe his words were “It looks like it’s going to clear up any minute now.”

That particular show was no exception. I, like many touring musicians, have been in similar scenarios countless times. In fact that particular summer, we were rained out four or five times. Without the proper advanced planning, some situations don’t allow much of an option. But sometimes a show could be salvaged at the last minute if an event coordinator would simply bite the bullet and realize that a smaller concert indoors might be better than no concert at all.

Tomorrow, I’ll be leaving for an outdoor show in northern Alabama. Our group is scheduled to perform on a couple of flatbed trailers covered by “an awning” at 8:30 PM tomorrow night. Earlier in the week I suggested to the event coordinator the possibility of renting a large “circus style” tent, complete with sides, as rain has been in the forecast for almost a week now. As of this moment, the National Weather Service forecast says “Thunderstorms are expected to become widespread during Saturday across northwest Alabama, and spread gradually eastward during the afternoon and evening hours. A few thunderstorms may be capable of producing flash flooding.” I guess we’ll soon find out if he went with my tent idea. Regardless, I’m hoping we get lucky, but experience tells me to be prepared to hear the words “It looks like it’s going to clear up any minute now.”