After several days of heavy rain had inundated the coastal town of Darien, Georgia, I was more than pleased to view a beautiful sunny day out the window when I first walked to the front lounge of our bus last Friday morning. All week long I had feared a washout for our 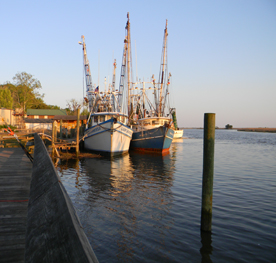 concert at the annual “Blessing of the Fleet” in the picturesque fishing community of Darien, so it was comforting to know that the weather would be on our side for this one. A little while later we landed our bus at the concert site – a homey little park lined with majestic old trees covered in Spanish moss on one side; and a long, riverside dock lined with fishing boats that abutted the river inlet that led to the Atlantic Ocean on the other.

Darien, Georgia, is a town right of southern folklore, and retains a unique feeling and charm despite its rocky history. Built right on the Altamaha River in 1736 by Scottish Highlanders, it was a historic battleground during the Civil War where black troops saw some of their first action. On June 11, 1863, the town was looted and “burned to the ground” by Federal Troops, an act that would later be referred to as a “Satanic Action” by Colonel Robert Gould Shaw, the reluctant commander whose troops committed the act. Darien was rebuilt after the Civil War ended, and would eventually become a fishing village, with wild Georgia shrimp becoming a major part of the local community’s livelihood.

Of course we would be fortunate to experience some of this fine local seafood firsthand shortly after sound check when we were treated to a dinner at “Skippers Fish Camp,” a cozy little restaurant that sat right on the edge of the river. After dinner and a little downtime, the sun began to set and the park began to come alive with activity. As the warmth of the sun began to fade, an amazing sunset briefly 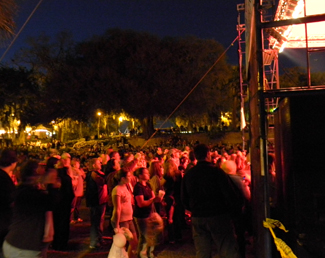 appeared over the nearby bridge overpass, and the sky became a deep red until the sun disappeared beneath the horizon. Darkness now upon us, the grounds began to quickly fill with locals and concertgoers while a local band took the stage to heat things up for Rhett’s show.

A little while later it was show-time and the park was filled to capacity. Concertgoers covered every visible square inch of grass in the park, lined the hill to our right, and filled the docks to our left. Meanwhile others enjoyed the show while hanging out on the dozens of boats that were tied to the dock. Rhett was in great form and ran through his set of radio friendly hits, a few renditions of his favorite classics, and our own versions of some of his most recent songwriting masterpieces – “The Shape I’m in” recently cut by Joe Nichols being one of the standouts.

The crowd on this warm and vibrant night was festive and on our side from the start. They were quite vocal too, cheering loudly after every song, and singing along with many. When the main part of the show ended; the strong, roaring applause warranted an encore, and we returned to the stage for a few more. By the time we left the stage for the last time on this evening, we had played an hour and 45 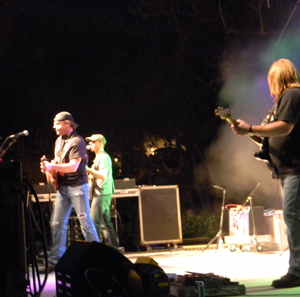 minute set, and fun was truly had by all.

I find it inspiring to see that Rhett, despite having such recent, major success as a full-time songwriter, still loves to perform live. Regardless of the kind of day he is having, when he hits the stage, he gives his all to the performance at hand, and to the people who came to see him. This kind of energy and focus makes it easy for the rest of us to play with the same kind of fervor. A small town like Darien, Georgia, with a population of around 2000, doesn’t have a festival or concert on this level very often, and their appreciation of our performance was both genuine, and evident. By the time we were heading back to Nashville, we all had a good feeling about our short stay in Darien. The town had been a wonderful host, and we were happy to help this community feel good on this day.

In the world of the touring musician, years of playing live shows can render concerts to be a bit of a blur, with one show blending into the next. But all of these shows do matter – each concert can, and should be a special event. When we visit a small community like Darien for a brief moment as this, it can have a lasting impact on people. This was also the case when we performed in the small town of Winchester, Tennessee, a few weeks ago. Even though the crowd wasn’t particularly large in Winchester, maybe two or three hundred folks in a local high school gym, everyone in attendance that night left with a smile. When you give your all to these folks, you might to help create a special memory that could last a lifetime, at least for some. I believe that this sense of community and goodwill is at the core of many a great performer. The great feeling we got at the show from the people of Darien last Friday is why many of us musicians love what we do, and this helps make being a musician a noble and worthy endeavor. Thanks Darien! 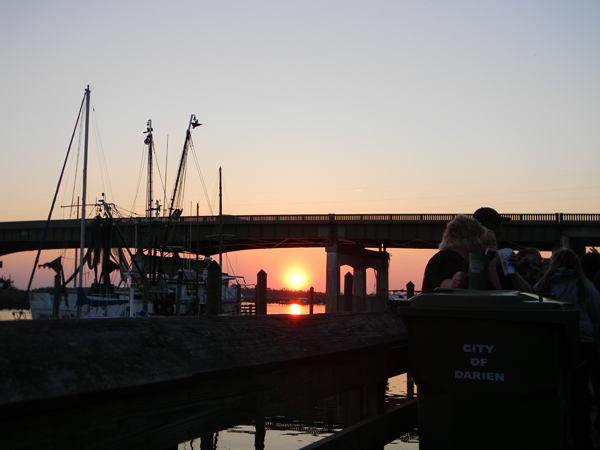