Last weekend the Rhett Akins tour rode into Harrisburg, Pennsylvania for what would be one of our coolest outings in a while. Fans of Michael Waddell and his popular hunting show “Bone Collector” were about to be treated to a special night of fun and music for the show’s third annual fan club party, and it was 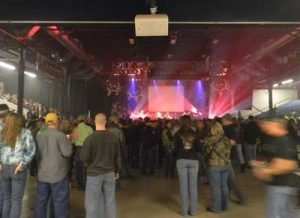 our job to provide some extra “lift” on this particular night. After a long day of setup and preparation the doors finally opened at 7 PM, and the “small arena” at the PA Farm Show Complex began to fill quickly with an excited crowd of hunting aficionados. The Bone Collector crew had laid out quite a spread, and the guests began enjoying the free buffet with a few cold ones while the sounds of Rhett’s hunting songs from “The Brotherhood Album” filled the air in a hall that looked ready for an Aerosmith concert.

The place was filling up fast, and soon “Bone Collector” stars Michael, T-Bone, and Nick Mundt, were accompanied by some of the other show organizers on stage to offer a warm welcome to the crowd. After raffling off some free giveaways, the first performer, MCA recording artist Ashton Shepherd took the stage and played a short acoustic set with one of her bandmates, her clear, country voice filling the auditorium. Near the end of her set T-Bone came back out and invited a couple up onto the stage to deliver one more prize giveaway. Apparently, the couple were longtime fans of the show, and what at first looked like a raffle giveaway quickly became a more substantive moment when the fellow dropped to his knees and proposed to his unsuspecting fiancé. The woman had no idea this was going to happen, and was near tears as they danced on the stage to a touching serenade by Ashton. After a few more prize giveaways, Rhett and band took the stage. 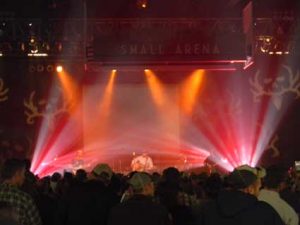 Our first tune was “My Baby Looks Good in Camouflage”, one of several hunting themed songs we would perform from Rhett’s latest album project, and the crowd was instantly singing along with this song that has never even been on the radio. Midway through the set, Rhett announced that we were going to play his song “Bird Dog” and asked if there was anyone in the crowd who knew the song and wanted to come up and sing along. Two fellows in the front row made their way onto the stage and joined Rhett for an “interesting” rendition, after which Rhett announced “Sorry, I won’t do that again.”

By the end of Rhett’s first rocking performance the place was buzzing with excitement, and many of the 1200 plus fans were crowded up to the front of the stage, standing elbow to elbow in a sea of camouflage. After a few more giveaways, Michael introduced the night’s unannounced “special guest” Aaron Lewis from the band Staind, and the crowd was treated to an intimate acoustic version of “It’s Been a While”, amidst his four song set.

It was now time for a final round of giveaways and Rhett’s second and final set to cap off the night. With a few big surprises still in store, Rhett kept the first part of this set short and sweet, and by the time we had played three or four songs he was inviting Ashton back up to the stage for an unplanned sit in. The two sang a heartfelt duet of the Hank Williams Jr. classic “Dinosaur” and the crowd roared with their approval. Next, Rhett brought up Michael to play some guitar, and Nick Mundt to sing Whitesnakes “In the Still of the Night”. Nick may be a hunter by trade, but it’s obvious that he may have been a rock ‘n roll front man in another life, as was evident from the bloodcurdling howl he let out at the beginning of the tune. His scream, combined with the sound of three electric guitars and our rhythm section thru a mega-watt PA system, threw the night into overdrive. The night was now beginning to feel like an episode of Don Kirshner’s “Rock Concert” and I ran out to the center of the stage to exude a little “attitude” with Nick during this fun moment, both of us getting down in a rockstar stance.

Now it was time for the grand finale and Michael’s 10-year-old son, Mason joined us to sing the final two songs. With Michael still on guitar, we launched into AC/DC’s “TNT” with some real fire and fury, and it was Mason who was now running the show, the crowd instantly showing their approval for one of the world’s youngest front men. While Mason worked the crowd, Nick and T-Bone sang backup vocals, the crowd now singing along too, and I was rocking out with Mike who was now showing off some of his new “guitar moves” that I had shared with him during our rehearsal earlier in the day. When the song ended, the crowd response was one of the biggest of the night, the roar almost deafening, and Nick hoisted young Mason up onto his shoulders for a victory lap. Not wanting this moment to end, we did one more song to take full advantage of our would-be rock ‘n roll army, the Guns and Roses classic “Welcome to the Jungle”, and again, young Mason was triumphant.

The song ended, and Michael stayed on guitar for the last song of our rock ‘n roll crescendo, Rhett’s rendition of “Last Chance for Mary Jane”, a real rarity. I don’t think I’ve played this many classic rock songs in a row since I moved to Nashville. It was kind of like going back in time and playing in one of my old top 40 bands, except through a million-dollar PA system, and with a bigger crowd! The concert ended and Michael was back on the mic thanking the crowd and his guests for being a part of this special night. Over the years I’ve played many “corporate” type events, and I can’t think of any that possessed the kind of fun and spirit that was in the room on this particular night. The folks at Bone Collector sure know how to throw a good bash and I can hardly wait for the next one!