Saturday, June 19, 2010 started out innocent enough when I awoke on our tour bus in a motel parking lot in Montgomery Alabama. The fact that the nearest location of any hotel to this 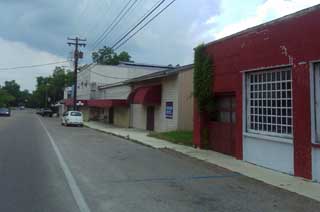 venue was a 30 mile, hour long bus ride, might have been the first clue that this was going to be a rough day. We set out at noon for this four band extravaganza at the Extreme Mud Sports Park in Eclectic, Alabama and the temperature was already into the 90s. The view from the bus window was picturesque as we wound thru this sparsely populated area of rural Alabama. The sky was beginning to cloud up a bit as we turned off the main road and began following a four wheeler down the half-mile or so “gravel” road that led into the park. The road was not in very good shape, and by the time that we realized we might be in trouble if it rained, it was too late, as we we’re already committed with no place to turn around. We came around the final corner to the “concert area” and almost 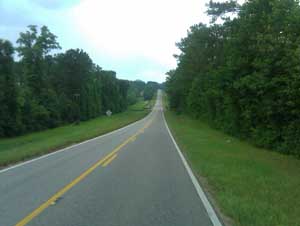 got stuck in the soft ground just backing the bus into place.

“If it rains at all, we are never going to get up that hill.” were my first words to one of the event coordinators after a brief introduction. “We got plenty of big tractors round here, don’t worry we’ll getcha out” was the response I got, and I must admit that I felt hardly reassured. I had the runner take our driver Steve to the hotel and then met the ”stage manager”, a local radio station employee whom I will refer to as “Puff the magic DJ”. I deemed him this nickname because he magically organized the daily activities by chain-smoking cigarettes while sitting in a van that was parked about 50 feet from the stage, and facing the opposite direction.

It had already rained a bit that morning, so the sound crew was running behind and our sound check had to be pushed back. We were sharing this bill was Ashton Shepherd, and were allotted the third time slot, scheduled to play at 6 PM just before Ashton. One of the only saving graces of this entire day was a selfless gesture made by Ashton’s drummer, Brian, who volunteered the use of his drum kit to the other bands to save time and stage space. Of course such a grand gesture became needlessly complicated when ‘Puff’ instructed the first band to begin setting up their drums in the middle of this tiny stage during Ashton’s band’s set up. It was inevitably up to me, apparently the only person on site to attend stage-managing school, to sort things out, and the unneeded 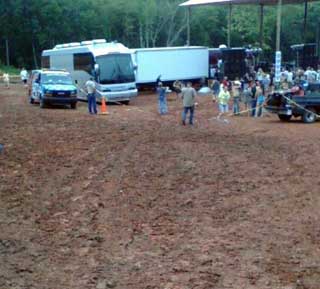 drum kit quickly vanished after a brief conversation between me and the drummers.

Then the rain came. It started coming down lightly sometime around 2:30, and by 3:00 it was pouring. At four o’clock it was still pouring. We watched in horror from the bus window as the only exit route, a couple of hundred feet of uphill clay colored dirt in front of us, became a nasty sea of orange mud. Meanwhile, out the other window of the bus, we viewed about 50 or so muddy looking Alabamans standing under the covered stage area in front of the sound equipment now covered in plastic, while mud covered trucks and four wheelers played in a muddy pit just beyond the stage. 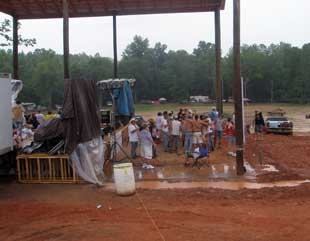 Finally, around 5:30 the rain subsided, and I sent a runner to pick up Steve at the hotel, as we now needed to figure out how we would get the bus out of this hellacious valley of mud. Meanwhile, Ashton’s band finished setting up their backline, and the first band went on just after 6:00. As the event was running two hours behind, we were now foregoing our sound checks and in “throw and go” mode. I asked ‘Puff’ to find us a table and chairs for the merch area (a request that I had previously asked him earlier in the day, earlier in the week by telephone, and in an e-mail). His response came off as this was the first time he was hearing of this and stated “I don’t know what they have here, I’ll work on it. We’ll find something”, and then he hopped back in his smoke-filled van to continue his daylong duty of staring out the window. Needless to say, the requested items never appeared despite further repeated inquiries, although Kelly was able to eventually share a table provided by Matt Stillwell’s band.

From mid afternoon on, every trip from the bus to the stage or elsewhere on the grounds required a slippery trek through three or 4 inches of heavy wet mud, caking to our feet like ankle 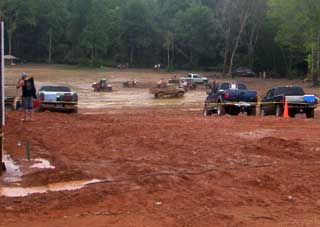 weights. At about 6:30, Steve arrived back on site, and I could see the look of amazement on his face as he appeared on the top of the hill, staring down at our pristine white bus as if it was sitting on a deserted island in the middle of the Pacific Ocean. After conversing with Steve, I approached the owners and they presented their plan to scrape off the top three or 4 inches of mud from the road with a tractor, and then to tow the bus out. Shortly after this, they began scraping, and the rest of us continued stressing.

By 7:45, the second band ‘Matt Stillwell’ was just finishing their set and we loaded our gear onto the deck to prepare for our show. At about 8:15 we were ready to go, and Puff asked me 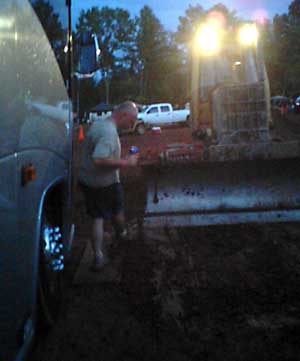 if there was anything specific he should say regarding Rhett’s introduction. I told him to mention a few of Rhett’s radio hits, and that Rhett has just released a new CD of hunting songs with Michael Waddell called ‘Bone Collector’ which is available at the merch area. So, of course, Puff delivers an intro void of any of this, and after rambling some fast talking Alabama DJ bullshit, exudes “Ladies and gentlemen please welcome to the stage Rhett Akins.”

Midway through our set, we all witnessed what was perhaps the most exciting event of the day, that of our bus slowly moving up the hill, towed by a large tractor. I literally wanted to stop mid song and applaud as I saw it slowly disappearing from site, well on its path to solid ground. Upon this, I waved Kelly over to the stage, and asked her to organize after show transportation to the bus. She went and found Puff and requested that he had a ride ready for Rhett as soon as the set was complete, and transportation for the rest of us and our gear a few minutes later. We rocked the small but enthusiastic, mud covered crowd for about 60 minutes total, and needless to say Rhett walked off the stage to find no vehicle awaiting him. After quickly packing up our gear and clearing the stage, I went and found Puff and said “Where’s the ride? Rhett’s been waiting 10 minutes already.” “It’s not here yet?” he exclaimed. “I asked them to send somebody 5 minutes ago.” And with that, he quickly hopped in his van and drove off, never to be seen again. I can’t say I was surprised as it had long become obvious that either his memory, or his sincerity was literally nonexistent.

I found one of the owners, organized our exit, and a few minutes later we were back at the bus on the street above. The valley of mud now behind us, we could finally begin to relax. None of this kind of turmoil is ever funny in the moment, but as time is the ultimate healer, we were quickly able to see this horrific day a little more cheerfully, although we we’re now completely drained. Kelly grabbed the bottle of Crown and some solo cups, and poured a much-needed round of shots. I proposed a toast to cap off our adventures in the valley of mud. “Here’s to friends with tractors!”

I would like to add a special thanks to the guys with the big tractors, and everyone in Ashton Shepherd’s group for their generous sharing of backline, and overall team spirit. 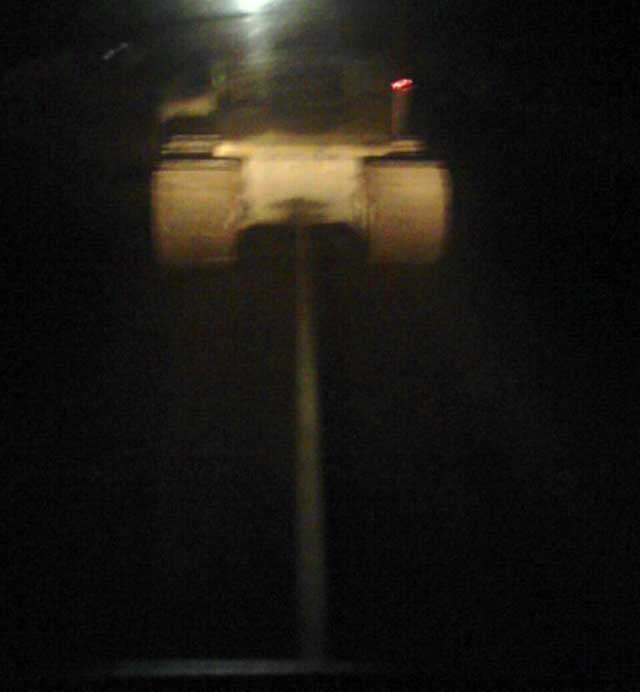