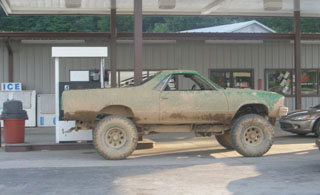 was just after 1 PM on Saturday, May 29 as we pulled into the Fast Lane minimart in Huntsville, Tennessee. The parking lot of this fine establishment would be our home base for the day as this was the closest our tour bus could safely get to the mountaintop concert site. The event we were playing on this hot and humid Memorial Day weekend was “The White Knuckle Event” at Brimstone Recreation, an annual ATV convention on which thousands converged from all over the country, some even traveling from as far as Canada.

Shortly after our arrival, the event coordinator arrived with a fleet of four-wheel drive pickup trucks, our gear hauling and runner service for the day. Some local fellows helped load the gear into the back of the trucks, and we hopped in to make the 5 mile, 30 minute ride to the top of the mountain. The first couple of miles of this trek was quite scenic, winding through a maze of fields and rolling hills spotted with picturesque homes and cabins. After about 10 minutes of driving, the pavement ended and we proceeded up some steeper inclines as the road turned to dirt and gravel. We we’re now going up the mountain, and the old logging road on which we were traveling was a flurry of activity, with a steady stream of four wheelers and other off-road vehicles coming and going in every direction. The air was thick with dirt and dust kicked up from all the ATV’s as we passed a couple of campsites along the way.

A little while later (it seemed like an hour) we reached the summit and a spectacular panoramic view of the mountain range came into focus. We backed up the pickups to the stage and commenced our load in and sound check. The stunning view off the back of the 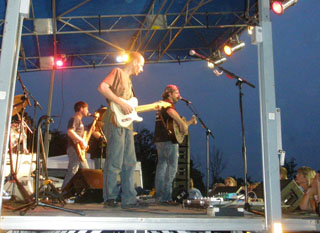 stage was that of several other peaks, jettisoning up across the horizon under some billowing clouds that seemed to stretch on for as far as the eye could see. The contrasting view off the front of the stage was that of a sea of four wheelers dotting the hilltop amidst several vendor tents, all viewed through a thick haze of freshly kicked up mountain dust.

By four o’clock we had finished sound check and strapped in for the bouncy ride back to the bus. Chilling on the bus for a little bit, we dug into the event provided meal of country ham, green beans, steamed corn, and hot rolls. As this was the only store around for miles, the parking lot was a flurry of activity, providing varying degrees of amusement which could be viewed through our tinted bus windows. 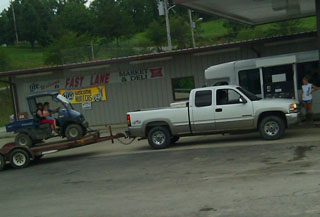 At one point a truck pulled up towing a trailer upon which a four wheeler containing several young family members sat. A little while later, one bright fellow took off on a dirt bike with his toddler sitting on the handlebars. It was a regular ATV Woodstock, and after dinner and some showers we hopped back into the pickups for another bouncy ride up to the peak as it was getting near showtime.

Now nearing dusk, we were in amazement upon reaching the concert site when the view of 10,000 concertgoers sitting on thousands of ATVs came into sight. We hit the stage running, and the powerful PA system filled the night air with the sounds of Rhett Akins music. We began the show with our appropriate onslaught of ‘Down South’ and ‘I Brake for Brunettes’ and the crowd was instantly on our 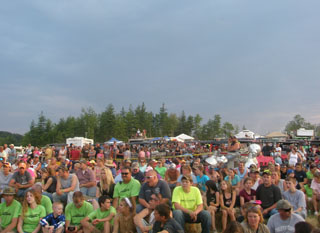 side. After a few more tunes, Rhett introduced me as the bands only Yankee and encouraged me to play some southern slide guitar. This led to our rendition of ‘Curtis Lowe’ which was followed a little while later by some hunting songs from his new CD like ‘My Baby Looks Good in Camouflage’ , ‘Duck Blind’ and ‘Hung Up’.

We finished the show to a massive ovation which brought us back for a brief encore. Just before we began our short second round I was informed that one of the patrons wanted to propose to his fiancée on stage. A minute later, an excited young fellow stood on stage in front of the masses and told his girl he loved her and wanted to marry her. Teary-eyed, the girl made her way to the stage to meet her love, at which point he gave her a ring. Everybody got all mushy at this point as we played Rhett’s hit ‘She Said Yes’.

Our mountain top adventure complete, we loaded up our gear, road back down the mountain, and hit the road. 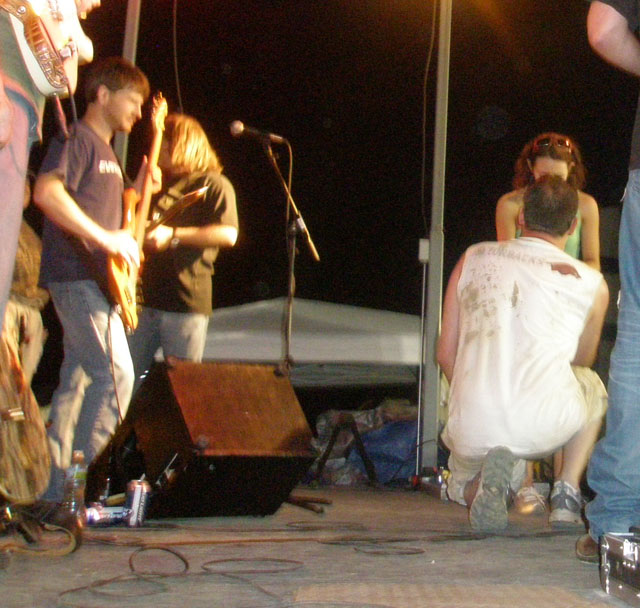