By Eric Normand What an amazing run of shows we had with Rhett Akins and Dallas Davidson on the forth installment of the Luke Bryan Farm Tour! The sold out tour embarked on eight shows across the Deep South, with Rhett and Dallas performing acoustically on the first four, and me and the boys joining […]

END_OF_DOCUMENT_TOKEN_TO_BE_REPLACED 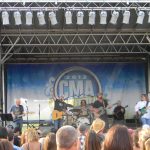 Even though the majority of the people who come to Nashville for CMA week are country music fans, you didn’t have to be one to enjoy the BMI songwriter showcase-tailgate party yesterday at LP Field. This unique event was as much a foot stompin’ rock concert as it was country music show, and the crowd […]

END_OF_DOCUMENT_TOKEN_TO_BE_REPLACED

During the summer of 2008 when the Rhett Akins band was between bass players, our sound engineer Penn Robertson threw out the idea of calling his friend Oteil Burbridge to sub a few gigs, as he was currently on hiatus from his regular gig with the Allman Brothers. Apparently the brothers were on an extended […]